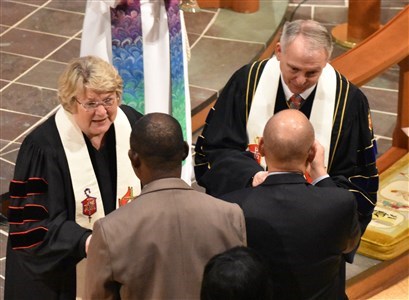 Coming from Africa, Asia, Europe and North America, the more than 100 bishops who will be in attendance will also tackle proposals on how to dismantle racism, promote discipleship; and strengthen mission strategies in the global denomination.

The meeting opens on Sunday, Nov. 3, with a Memorial Service at First United Methodist Church in Waynesville, North Carolina, to remember and honor bishops and spouses who have died in the preceding year.

Among the bishops to be memorialized are Bishop Benjamin R. Chamness, Bishop William B. Oden, Bishop Judith Craig and Bishop C. Dale White. There will be a special moment of remembrance for Bishop Kenneth Hicks and his wife, Lila Elaine Hicks, who died a few days apart. Spouses of bishops to be honored include Mrs. Mary Ann Hunt, Mrs. Mary Jean Russell and Mrs. Linda Carder.

Election of officers
The bishops will be electing a new president, president-designate, and secretary of the Council who will serve for two years. The current officer holders are Bishop Ken Carter, president; Bishop Cynthia Fierro Harvey, president-designate; and Bishop Mande Muyombo as secretary. The new officers will take office at the end of the May 2020 General Conference.

Also to be elected will be the executive secretary and the ecumenical officer.  The executive secretary serves as the operations officer of the Council and works closely with the Secretary to monitor actions of the Council and Executive Committee. The ecumenical officer is responsible for relationships with other Churches and/or ecclesial bodies. Both serve four-year terms and take office on September 1, 2020. Bishop Marcus Matthews and Bishop B. Michael Watson are the current holders of the positions.