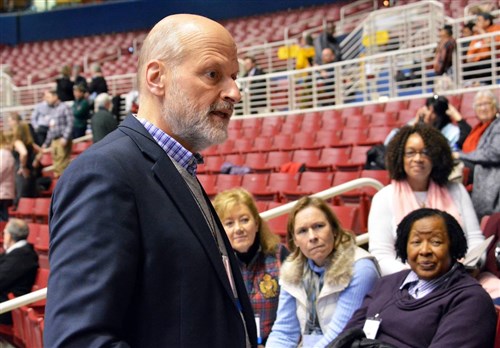 The United Methodist Church’s top court is poised to review actions taken in February during a contentious legislative session that still threatens to divide the denomination.

The Judicial Council meets April 23-26 in Evanston, Illinois. No oral hearings are scheduled, and the court’s rulings will be posted on its website at some point after the session concludes.

The April 2019 docket is short but significant.

The Rev. Timothy Bruster, a delegate from the Central Texas Conference, later made a motion to request a declaratory decision by the Judicial Council on “the constitutionality, meaning, application and effect” of the Traditional Plan. The motion passed 405-395, exceeding the requirement that at least 20 percent of delegates approve sending a request to the council.

Bruster also happens to be the first clergy alternate for Judicial Council, although he has recused himself from the spring meeting.
The second docket item is a request from the United Methodist Council of Bishops for a declaratory decision on the constitutionality, meaning, application and effect of Petition 90066, which was one of the proposed “exit plans” allowing local churches to leave the denomination.

In his brief to the Judicial Council, Bruster argues “that the Traditional Plan as adopted by the General Conference should be treated as one plan and be ruled unconstitutional as a whole by the Judicial Council.” He cited Decision 1210 from General Conference 2012, when the court looked at the entirety of “Plan UMC” when ruling it unconstitutional. That legislation would have restructured the church agencies.

Bruster also argues that language in the Book of Discipline singling out “the LGBTQ+ community” is contrary to the church’s constitution and violates the rule to “do no harm.”

During the Feb. 23-26 special session of General Conference, the conference’s legislative committee submitted 17 petitions to Judicial Council for review.

In response, the court in Decision 1377 found nine petitions and one sentence in another petition  — on subjects ranging from episcopal accountability to examination of candidates for ministry to disaffiliation — to be unconstitutional.

Petition 90066, which dealt with church exits, violated Paragraph 33 because it omitted the annual conference as the body ratifying a local church vote to change affiliation, the Judicial Council ruled.

This exit strategy from the denomination was amended before later approval by General Conference 2019, but remains unconstitutional for two reasons, the Council of Bishops said in its request for a declaratory decision. First, there is still no requirement for annual conference approval, the bishops pointed out. Second, there was no change in disciplinary law related to homosexuality by the legislative body that would trigger provisions allowing churches to leave.

Much of the rationale in finding the petitions unconstitutional in Decision 1377 came from a previous ruling made last October when the court met in Zurich. Decision 1366, which covered a review of the proposed legislation for the Traditional Plan and One Church Plan, stressed that church law must be applied fairly at all levels of the connection.

The Rev. William B. Lawrence — a former president of Judicial Council and retired dean of Perkins School of Theology who filed his own brief at the Zurich meeting — finds it “theoretically possible that some decision made in Zurich could come out differently.”
Legislation considered before General Conference 2019 could be seen as hypothetical, while after the General Conference action, he noted, it’s a fact. “People could view it differently.”

For the same reasons, Lawrence said, the Judicial Council could decide that the Traditional Plan, in its entirety, is not constitutional. “Something that had passed muster in Zurich might not pass muster this time.”

In order for the top court to make a ruling on constitutionality, “all nine seats at the table must be filled by members or alternates,” he said. At least six of the nine who are seated must vote the same way.

That was the case with Decision 1377, when the majority of Judicial Council members found that two petitions about disaffiliation, 90050 and 90066, were in conflict with the constitution, but a dissent was filed by three participating in the decision. In the end, Petition 90050 was not adopted by General Conference.

This time around — on the disaffiliation issue or any other matter — the composition of the nine people making the decision could change, or another person might be persuaded to join the dissent and the ruling could change, Lawrence pointed out. If the vote of unconstitutionality drops from 6-3 to 5-4, it remains constitutional, he said.

The separate request for a declaratory decision on Petition 90066, which “adds a provision of law, but amends nothing in regards to the trust clause” that holds property within the denomination, also opens the possibility of the top court considering whether a more recently written law should take precedent, Lawrence said.

He explained that while it is generally true that only General Conference has full authority to write the laws of the denomination, the Judicial Council also has authority by reviewing and affirming decisions of law by individual bishops, even though such laws are not published anywhere except as “case law” in Judicial Council decisions.

Lawrence said that he personally would be opposed to a Judicial Council decision that created case law out of what could be a very temporary situation. General Conference 2020 has the opportunity to overturn any of the legislation adopted in 2019.


A snapshot of Judicial Council

Exactly who is part of Judicial Council, the top court of The United Methodist Church, and what are its duties?

United Methodist Communications interviewed several members of the Judicial Council last October. In a new video, they discuss the court’s role and responsibilities.

“We are not lawmakers,” said the Rev. Dennis Blackwell, a veteran council member from the Greater New Jersey Conference. “The law is actually made in General Conference. Our responsibility as council members is to interpret the law of the church.”

Resource: What is … the Judicial Council?

Bloom is an assistant news editor for United Methodist News Service and is based in New York.