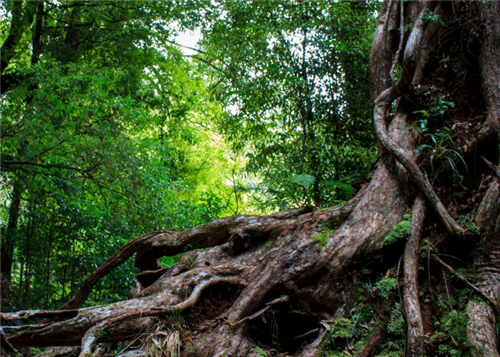 (This article first appeared on EmergingMethodism.com)

A giant red oak tree fell across the road in our neighborhood during a particularly violent storm this summer, taking out other trees as well as a split-rail fence. None of us who drove by the next morning could believe that the stately titan had toppled. I walked over to take a closer look. I was astonished to discover that, even though it had looked healthy and leafy on the outside, there was decay at its core. Now, its wide, thick trunk stuck up from the ground—broken, splintered and exposed. Things looked final for the ancient tree.

As I walked away, I remembered two moving books I have read in the last few months; profound, eloquent books about—of all things—trees! The Hidden Life of Trees by Peter Wohlleben and The Overstory by Richard Powers take the reader on a journey into the mysterious, interconnected, mutually sustaining lives of trees. Wohlleben’s nonfiction book opens with a personal story of coming across a patch of mossy “stones” in a forest of beech trees. Seeing them, he bent down and pulled the moss off one of them but when he tried to lift what was underneath, he discovered it was attached to the ground! It was not a stone at all; it was petrified wood with its bark still attached.

When he scraped away some of the bark, he was again surprised to find a greenish layer that meant that there was chlorophyll, which meant that the piece of stump wood was still alive! Knowing that the tree must have fallen four or five hundred years earlier, he wondered how the tree’s remnants could have sustained life for so long. It was obvious that something incredible, something life-giving, was happening to that stump.

He speculated that the mossy stump was getting help from neighboring trees and their roots (1). This theory led him to wonder why neighboring trees would “share their food with their own species and sometimes even go so far as to nourish their competitors.” Through extensive research, he concluded that trees derive huge benefits from working together and that “every tree…is valuable to the community and worth keeping around for as long as possible” (2).

I look at trees differently now that I have learned that they “care” about each other, that they “care” for each other. Silent though they may be to our ears, some yearning language passes between them that encourages even the rotten stump to persist and drink deeply of the nutrients being funneled to it from its neighbors and family members. 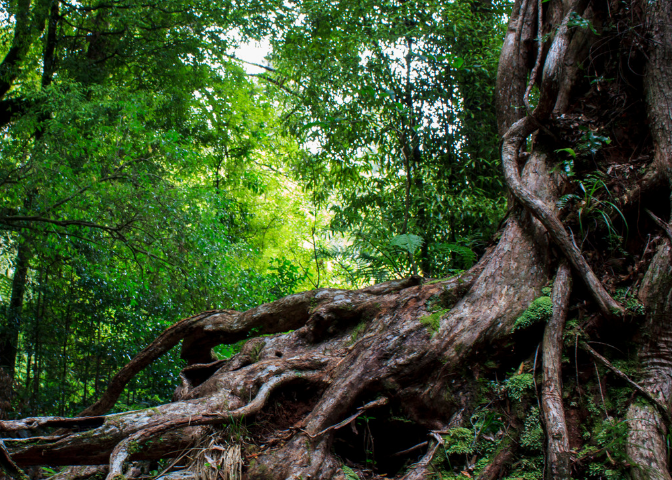 At General Conference 2019, it seemed that a giant, ancient tree had fallen. Leaving St. Louis, I felt little hope that the splintered, broken stump of my church could find enough nourishment to go on living. I, too, looked down at my feet with tired eyes and could only see hard, unmovable rocks in our path. Who would be able to muster enough energy, heart and hope to scrape off the layers of gloom in search of a glimpse of green? Who would even want to? It seemed that what we needed most was to grieve, pray, sit shiva for our United Methodist Church. And, as in most periods of raw mourning, there were no adequate words to capture the tangle of feelings, thoughts and worries that covered us like wet moss covers a forest rock.

Returning home was a blessed relief until I began deeply processing what had happened and what might happen. What would I preach on? You may remember that the Sunday following General Conference was Transfiguration Sunday. I tried to pawn it off on my colleague but he assured me that folks wanted to hear about General Conference and what I thought about it all. How could I help my parishioners understand? Would we lose members, would attendance decrease, would our LGBTQ members and friends decide they were unwilling to absorb another blow to their spirits?

I must confess that I acted like a lone tree in a denuded forest during the days post General Conference. I felt alone and cut off from the soil and nourishment that had grounded me all my life. My roots were still planted, deep but I felt disconnected from the other trees with which I had been meaningfully entangled and by which I had been fed; even when the food supply had been small, at least it had been there. I wanted my giant, ancient, wide-spreading tree back, so that I could rest under its branches, so that I could possibly help with the pruning that it would take for new growth to push through the old bark and flourish.

Days turned to weeks and, as lonely and fragile as I felt, I was not ready to give up on the splintered stump that was left behind. Were there others who were in the forest that I was not seeing? Were there others who would be eager to share their spiritual nutrients with me? I began listening, searching and praying for a tool that would help me scrape off the bark and find the chlorophyll.

The tool came in phone calls from friends asking if they could pray for me and our church. It came in Kansas City around tables with complete strangers who struggled to put into words their deep hope for a next, faithful expression of United Methodism. It came when I let myself cry as I visited a church whose call to prayer that day were the words of Thomas Merton:

“My Lord God, I have no idea where I am going. I do not see the road ahead of me. I cannot know for certain where it will end nor do I really know myself, and the fact that I think I am following your will does not mean that I am actually doing so. But I believe that the desire to please you does in fact please you. And I hope I have that desire in all that I am doing. I hope that I will never do anything apart from that desire. And I know that if I do this you will lead me by the right road, though I may know nothing about it. Therefore, will I trust you always…”

It came when people who had never worked on a common goal came together to seek God’s leading in this next season of our church’s life by sharing stories, dreams, organizing efforts and the hope found in God’s love for all people. It came as I stood up at Annual Conference to present a petition for the full inclusion of ALL people, undergirded at that moment by new and old friends whose passionate love for all people had given me the courage to finally, clearly speak my conviction. It even came when a delegate seated behind me was bubbling with hostility, saying in more than a whisper: “You can’t believe what you are saying and still love Jesus.” I knew then that Jesus’s love covered and welcomed both of us. And that her voice, her struggle was every bit as important as anyone else’s because she was a part of our forest and we needed each other to live faithful lives.

In Richard Powers’ Pulitzer Prize winning book, The Overstory, trees figure into the lives of the book’s human characters at every turn. This intricate, moving, monumental book teaches us about the interconnectedness of all of life, human and botanical. In one section, we meet characters Ray and Dorothy who marry after a dramatic and convoluted courtship. Theirs is not a smooth, smiley-face laden love affair, but they work at it; they try to grow.

As their first anniversary approaches, Ray struggles with what to give Dorothy. “He says there’s nothing on Earth he can give to her . . . to thank her for what she has given him. Nothing, except for a thing that grows.”

He writes his wife a letter and gives it to her as she is leaving for work. The letter’s contents pique her curiosity so much that she tries to read while driving, consequently colliding with a linden tree (“The linden tree . . . is the tree of peace, whose tonics and teas can cure every kind of tension and anxiety”). Dorothy survives the accident. She will never forget the words Ray wrote in his letter:

“Every year, as close to this day as we can, let’s go to the nursery and find something for the yard. I don’t know anything about plants. I don’t know their names or how to care for them. I don’t even know how to tell one blurry green thing from another. But I can learn, as I’ve had to re-learn everything myself, my likes and dislikes, the width and height and depth of where I love, again, alongside you. Not everything we plant will take. Not every plant will thrive. But together we can watch the ones that do fill up our garden” (3).

God’s story with humanity began in a garden with an over  of a myriad of trees and there, it can begin again. It will take us all, reaching our roots and branches out to each other, sharing our food and our wisdom and most importantly, the nourishing grace God has poured out on and for us. In God’s forest called The United Methodist Church, every tree is important, whether young or old, splintered or splintery, filled with strength or struggling to stand. With God’s help, we can learn, as if for the first time, that we need each other to thrive.

An ancient tree may have fallen in St. Louis, but I choose not to wring my hands and just walk around the downed trunk, wondering how much firewood I can get out of it. Instead, I am placing my confidence in the stump and its neighbor trees, in the sun and rain that come down from heaven, in the nutrients that linger in the soil and in the glimpses of green that I believe are still there under the cracked bark. It may have looked final and, to some, it may still look bleak, but let’s remember that when God is involved, there is always chlorophyll to be found. Let’s help each other discover it.

The Rev. Ashley Crowder-Stanley is an Elder in full connection in Blue Ridge District of the Western North Carolina Annual Conference.

(1) Peter Wohlleben, The Hidden Life of Trees: What They Feel, How They Communicate (Vancouver: Greystone Books, 2016), 2.