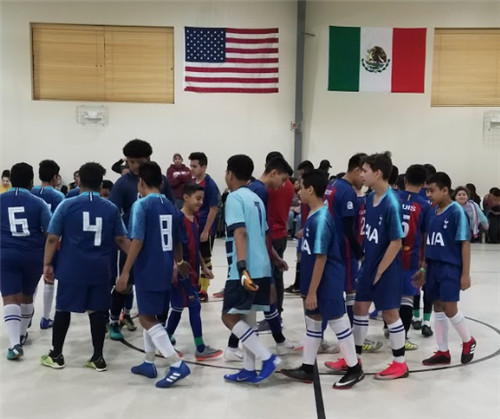 This integration all starts with an openness - an openness in where God is leading you, and an openness in listening to your community. Konnoak Hills had a gym that had been built in 2008 and since then was just sort of sitting there. A member of the community, originally from Mexico, was looking for an indoor space to rent. He worked with kids in the community and they needed a place to play soccer in the winter and summer when the leagues that operate in Winston aren’t running. Due to the cold weather, winter is the peak season for the ministry. The church originally saw renting the building out as a way to make some money, but the liabilities in doing that would end up costing more; so instead they decided to partner with the community to use the gym as a ministry. They sat down and planned what this would look like with a man named Jerry who has a passion for this work. Jerry is not a member of Konnoak and actually belongs to another church, which necessitates the mindset of working together without working towards adding members to the roll. Jerry puts in countless hours with this ministry, organizing the teams, getting coaches, and finding referees. He raises the money for uniform, trophies, and paying the referees internally while the church pays the electric bill. If they can, each child pays a registration fee of $25, but the church has a mini-scholarship set up for the families that cannot afford that. They try to run six week seasons and at the end of the six weeks the teams are jumbled up again so the kids are able to meet and play with those they haven’t before.

The laity within the church play an active role in that they are there to open the doors, provide Gatorade and snacks, and really just support the ministry and show the children that they care. South Winston is predominantly Hispanic with the second largest ethnic group being African Americans. It is also home to two major gangs, and one of the main reasons the church is so willing and involved with this ministry is because by providing a space for the kids to come and play soccer they are keeping them off of the streets.

For Chris, the long term idea for this ministry is to turn it into a Fresh Expression. He wants to create a soccer church where children will show up, have a devotional, and play soccer afterwards. This ministry has not only inspired Chris to dream bigger of what this can turn into, it has helped the church look at how they can reach the community in different ways. After starting the soccer league, they also pushed beyond the boundaries of how they were doing things and now also provide a community meal monthly.

So what would it look like for your church to start something like this? If you don’t have a gym or indoor space, you can easily do something like this outside in a field attached to your church. Pastor Chris says the best advice he would give to a church looking to do something similar is to look in unexpected places, outside of your immediate church. You will need to be willing to form relationships without expecting to get anything out of it, which when we think about it, is how God works. God works through grace and unmerited love. If we can mimic that, we can see ministry flourish.