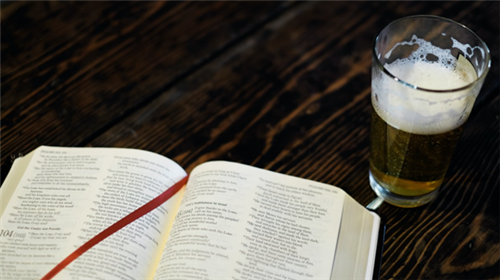 If you have ever met Rev. Randy Blanton, you will quickly learn that he has a love of craft beer and theology. When he moved to Aldersgate UMC in Shelby in 2016 he decided to combine two of his loves and host a Bible study at Newgrass Brewery in downtown Shelby. His first fall doing this he thought there may be ten to fifteen people who came out. When he showed up for the first study there were almost fifty people there. They had planned to have it inside, but with this number they instead moved into the alleyway connected with the Brewery.

At first, he received pushback from some members of the congregation about how it would look to the community if their pastor was doing a Bible study at the brewery, but this concern quickly faded when they realized the interest level something like this held. There was a concerted effort to have this Bible study on a Wednesday night to encourage the entire church to be in discipleship on Wednesdays. Parents would drop their kids off at church for youth group and children’s ministry opportunities, then go to the brewery, which was five minutes away, and then be back in time to pick up their kids when their groups were ending.

Randy would do this off and on until the pandemic hit, doing it for eight to ten weeks and then taking a break, especially around holidays, and then picking it up again for another eight to ten weeks. In the summers, they would do one four-week session since they understood families liked to travel and were gone a lot more during the summer. At first Randy would design the Bible study himself, but over time he began to use Faithlink, a Cokesbury resource. Randy paid around $10 for this resource which allows him to print as many copies as he needs. It is published weekly and it intersects scripture, theology, and whatever is happening in the world during that time. He chose this resource since the brewery could be loud and hard to use a lecture-based approach. This invited people to get together with those around them or at their table and foster relationships that way.

The only advertising Randy did for this was to put a flier in the window at the brewery; otherwise, it was word of mouth. While the majority of people who came were members of his church, there were some who were not that would come because they knew it was a nonthreatening, discussion-based environment.

If you'd like, let us know about your innovation ministry in the Western North Carolina Conference. This information will help innovators connect with one another and is an important step in furthering a culture of innovation in WNCC.