Commission starts to sketch options for the way forward 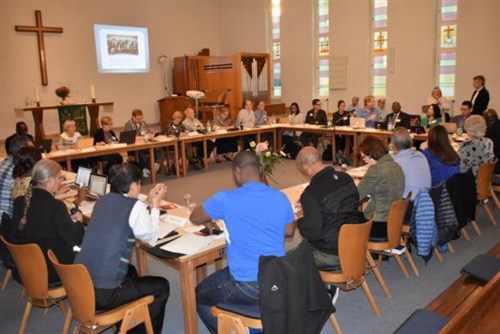 BERLIN, Germany – The Commission on a Way Forward has started sketching models to share with the Council of Bishops as options for finding a way forward for The United Methodist Church (UMC) regarding human sexuality.

During the meeting in Berlin, Germany (Sept. 18-20), members of the Commission expressed the need for the unity of the UMC, yet recognizing the different theological understandings and expressions on human sexuality.

From spirit-led devotions through heartfelt discussions to one-on-one dialogues, the members of the Commission delved deeper into the LGBTQ identity, guided by the values of multiplying our Wesleyan witness, fruitfulness, a heart at peace, de-centralization and simplicity.

“I am totally convinced that together we can get through this and with the hope we have, we can get through this together,” Dr. Hortense Aka from Ivory Coast said in the Monday morning devotion at the start of the Berlin meeting. She noted that her own personal journey was continuing “with faith, I can listen and see what God wants us to do.”

Dr. Aka, who is a lay leader and psychology professor, urged fellow members to be open as “I offer you my hospitality, my friendship, and my fellowship,” using the statue in her country as a symbol of welcoming to all of God’s children. Reflecting on Ephesians 4:4-6, she noted that there is hope of unity in diversity.

Recognizing that the UMC is a global church that is present in Africa, Asia, Europe and the United States, the Commission held the meeting in Berlin to help members see the implications of their work in a non-U.S. context. It was also an opportunity for members from Africa and Europe to travel for shorter distances since all the previous meetings have been held in the United States.

During its work in Berlin, the Commission started looking at missional and institutional models for a way forward. Those models are connected through resources of unity that were listed in the status report made available to the church in August.

The Commission’s moderators Bishops David Yemba, Sandra Steiner Ball and Ken Carter expressed optimism at the work done during the Berlin meeting and are hopeful that the members will offer useful models for the way forward.

“Our commission members moved more deeply into their convictions that lead them to love God and envision the future of our denomination. While we are exploring models of a way forward, we are ‘sketching’ them, with a pencil in one hand and an eraser in the other,” said Bishop Carter, who is the Florida Area resident Bishop.

“This is the work of conciliar discernment—we know that the Holy Spirit is not the possession of any one of us, but is in the midst of us. We know that members of our denomination want space from each other—because of theological differences from each other and the harm we have done to each other—and at the same time connection—because this is in our DNA. We are the one Body of Christ with many members, and God uses this diversity to offer grace and healing to the world,” he said.

In her devotion on Tuesday, Rev. Casey Orr, a deacon from Tennessee but currently serving in Texas, noted that it was in tense moments that healing and new birth can come. “I grieve the brokenness of our beloved church and those hurting in this most profoundly. It does not scare me, however, because with great courage and vulnerability, we have named the brokenness we all shared.”

Reflecting on the meeting, Commission member Tom Lambrecht said he was impressed by the fact that “we engaged ever more deeply around the issues that divide us as well as those that unite us. We gained greater clarity about the direction in which the Commission wants to move.”

Lambrecht noted that there was still a lot of work the Commission has to do to develop proposals and “I look forward to continuing that defining work.”

Emphasizing the need to keep the discussion in the global context, David Fields, a lay member from Switzerland, talked about the differences that abound in the Central Conferences and encouraged the members to view the proposals from the perspective of people outside the United States as well. He also challenged the members to think of the gospel from the perspectives of those marginalized.

Another lay member, Dr. Mazvita Machinga from Zimbabwe, emphasized the need for the work of the Commission to be sensitive to the context in which United Methodists outside the U.S. operate. “The meeting sees us going deeper into our mandate for finding a way forward and I am quite optimistic that a way forward that will keep our church together is on the way.”

She urged the UMC to take the Psalm 46:10 advice to be still and know that God is in charge and that God is working through people on the Commission. She also called on the church to be prepared to be available for all the people.

It was on the similar note that Bishop Grant Hagiya, a member of the Commission, offered his devotion on Wednesday morning, calling on the UMC to be the church that it was for his family when he lost his mother during his teen years.

Although his mother was the rock of the family, the church helped his family to carry on without her. “All these people were there to care for us and support us, how could we not survive? … That is an example of a high touch experience that transformed my life. … I stand here because of that event, dozens of those events.”

He said he would not have made it if he did not have the support of the church, “for me it was that 14-year-old who did not know he had a future without the church.” He said the church has to be there for such vulnerable people.

About the Commission: The 32-member Commission on a Way Forward was appointed by the Council of Bishops to assist the bishops in their charge from the 2016 General Conference to lead the church forward amid the present impasse related to human sexuality and resulting questions about the unity of the church.