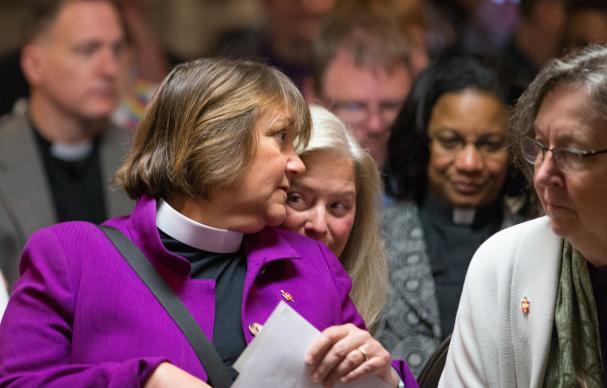 Bishop Karen Oliveto (left) leans over to speak with her wife, Robin Ridenour (behind Oliveto) prior to a meeting of the United Methodist Judicial Council in Newark, N.J. The denomination's top court ruled on April 28 that the consecration of a gay bishop violates church law. At right is Bishop Elaine Stanovsky.[/caption] By Linda Bloom April 28, 2017 | NEWARK, N.J. (UMNS) The consecration of a gay bishop violates church law, the top court of The United Methodist Church has ruled. However, the bishop “remains in good standing,” the Judicial Council said in Decision 1341, until an administrative or judicial process is completed. “Under the long-standing principle of legality, no individual member or entity may violate, ignore or negate church law,” said the decision, made public April 28. “It is not lawful for the college of bishops of any jurisdictional or central conference to consecrate a self-avowed practicing homosexual bishop.” Officials in the U.S. Western Jurisdiction consecrated the Rev. Karen Oliveto as a bishop on July 16, 2016. Based in the Denver area, she is the episcopal leader of the Mountain Sky Area, which encompasses Colorado, Montana, Utah, Wyoming and one church in Idaho. A petition from the South Central Jurisdiction to the Judicial Council raised four questions about the legality of that election. Judicial Council claimed jurisdiction to review its petition “only with respect to the consecration of an openly homosexual bishop” and said the rest of the petition, related to nomination, election and assignment, “is improper.” The vote on the decision was 6-3. Judicial Council members N. Oswald Tweh and Deanell Reece Tacha filed a joint dissenting opinion that the council had no jurisdiction over the petition. First lay alternate W. Warren Plowden Jr., who was sitting for council member Beth Capen, and council member Ruben T. Reyes each filed a concurring and dissenting opinion. The court rejected the argument made during the April 25 oral hearing by Richard Marsh, Western Jurisdiction counsel, that Oliveto’s same-sex marriage to Robin Ridenour in 2014 was not a public statement about her sexual practices. “A same-sex marriage license issued by competent civil authorities together with the clergy person’s status in a same-sex relationship is a public declaration that the person is a self-avowed practicing homosexual” for purposes of the prohibitive language in the United Methodist Book of Discipline, Paragraphs 304.3 and 2702.1(b), the council ruled. Church law requires all clergy persons to dedicate themselves to “the highest ideals of Christian life,” the decision said, including “their commitment to abide by and uphold the church’s definition of marriage and stance on homosexuality. An openly homosexual and partnered bishop is in violation of those minimum standards.” The decision further found that an openly homosexual and partnered bishop may be charged with disobedience to church law, along with other bishops and clergy persons who actively participate in the consecration of a bishop who has been found to be a self-avowed practicing homosexual through a judicial or administrative process. “Self-avowal does not nullify the consecration and cause removal from episcopal office but is a sufficient declaration to subject the bishop’s ministerial office to review,” the decision said. Judicial Council spelled out the process required by The Discipline for such a review, which begins with the filing of a complaint against the bishop. If action is not initiated by the jurisdictional or central conference, the president or secretary of that body’s college of bishops must take action. Pending the supervisory response process to review episcopal membership and office, the college of bishops, in consultation with the committee on episcopacy, “may suspend the bishop from all episcopal responsibilities for a period not to exceed 60 days.” The process allows for a bishop to be placed in the retired relationship “regardless of age” if it is “found to be in the best interests of the bishop and/or the church.” If there is no resolution, “the president or secretary of the college of bishops may refer the matter as an administrative or judicial complaint,” the ruling concluded. INDIVIDUAL OPINIONS In a joint dissenting opinion at the bottom of Decision 1341, Judicial Council members N. Oswald Tweh and Deanell Reece Tacha “respectfully” argued that the council did not have jurisdiction for the petition from the South Central Jurisdiction. “Our difference with the majority revolves simply around which are the proper body or bodies for making these decisions,” the opinion said. “This Judicial Council, like all judicial bodies, is restricted to deciding those matters over which we clearly have jurisdiction.” The opinion from Tweh and Tacha argues that the majority decision “relies on consecration of bishops as the jurisdictional ‘hook’ … because consecration of bishops is an act on behalf of the whole church. We are convinced that this is an elevation of consecration of bishops that has no limiting meaning for jurisdictional purposes.” Under the church’s constitution and The Discipline, only the Council of Bishops or General Conference have the authority to petition the Judicial Council “for declaratory decisions on behalf of the entire church,” they wrote. In a concurring and dissenting opinion, W. Warren Plowden Jr. — the first lay alternate, who was sitting for council member Beth Capen — said the Judicial Council does have jurisdiction and further concluded that the Western Jurisdiction “knew full well that it was acting unlawfully when it elected a self-avowed practicing homosexual as a bishop of the church.” Plowden said the Western Jurisdiction's action “negated, ignored and violated provisions of The Discipline and is null, void and of no effect resulting in the invalidation of Karen Oliveto’s episcopal office.” In his own concurring and dissenting opinion, council member Ruben T. Reyes agreed with Plowden’s opinion regarding the bishop’s election “but noted that fair process must be observed.” — Linda Bloom Bloom is the assistant news editor for United Methodist News Service and is based in New York. Follow her at https://twitter.com/umcscribe or contact her at 615-742-5470 ornewsdesk@umcom.org. To read more United Methodist news, subscribe to the free Daily or Weekly Digests.