This article was first posted in the March Newsletter for the General Board of Higher Education and Ministry.  It features one of our own local pastors: 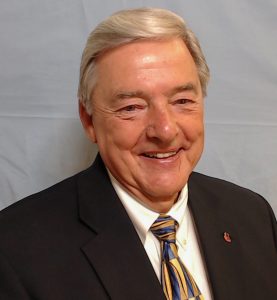 At 72-years-old, Edward “Ed” Stephenson may not be the typical Course of Study (COS) candidate. However, Ed made a commitment to complete the program and has remained true to his commitment. In 2011, Ed entered into the COS program at Duke Divinity School. His journey to Duke began when he was a young boy. “I saw the chapel at Duke and fell in love. It was the most beautiful thing I had ever seen,” described Ed. From that point, Ed knew that he would someday attend Duke Divinity School.

The time before Ed’s arrival at Duke included many twist and turns, and what he described as life getting in the way. Ed moved from his home state of North Carolina and lived in a few different areas around the south, including Monroe County, Mississippi when he attended nearby Mississippi State University. While studying at Mississippi State, Ed earned a degree in agriculture. Years later, Ed entered New Orleans Baptist Theological Seminary. However, illness in his family caused him to return home to eastern North Carolina before finishing seminary. With yet another obstacle, Ed was again kept from immediately answering his call to ministry. He settled back into life in North Carolina, and hoped to, but didn’t return to seminary.

However, the church was always close to Ed. He served as a lay speaker in North Carolina for years, and eventually became the local pastor for a small church, Fairview United Methodist Church (UMC), in Joy North Carolina. As Ed progressed in his service at Fairview, he was appointed to a second church in the area, Arney’s Chapel UMC, located in Worry, North Carolina (near Morganton). “I’m sure I am the only pastor who went from Joy to Worry in one Sunday,” Ed joked.

After a brief time as pastor for both churches, the joining of the churches became the topic of discussion. On July 4, 2011, the churches merged as the Arneys Fairview United Methodist Church with Ed Stephenson still serving as pastor.

The same year, Ed answered what he feels has been a lifelong call and enrolled in the COS program at Duke. With the support of Faye, his wife of nearly 10 years, Ed worked tirelessly to complete the program. But, within just a short time of Ed starting the program, Faye discovered she had breast cancer. Battling her illness, Faye remained a steadfast champion for Ed and encouraged him to remain focused on completing his longstanding dream. “She wouldn’t let me quit,” Ed explained. She not only encouraged Ed, but recruited others around the couple to support Ed’s education.

“The love and warmth I was shown by my Duke Divinity family was absolutely overwhelming when my wife died,” Ed said. “They supported and encouraged me to continue. Because of my age, I didn’t have to continue the program, but to honor her, I did.”

Ed officially completed the COS program in January 2017, fulfilling a dream, a call, and a promise to his late wife. When asked to describe his experience in the COS program, Ed said, “The program is hard. I am not a writer nor a young man anymore. But, it was one of the best experiences for me – I wouldn’t trade a million dollars for the experience. I am taking away so much from my time in the program, including some lifelong friendships.”

Ed plans to continue his work at Arney Fairview UMC for as long as he can. “I want to be the pastor people that I’d want for myself. I love God and all of his children. I am grateful for the privilege to serve.”

For those thinking of entering in a COS program, Ed advises, “Don’t give up. Remain committed and remember for whom and why you are there. You are there for God.”

To learn more about the COS program, visit  www.gbhem.org.

About GBHEM: As the leadership development agency of The United Methodist Church, the General Board of Higher Education and Ministry’s mission is to lead and connect the educational and ministerial life of the church. Every elder, deacon and licensed local pastor benefits from our training and candidacy programs. Many young adults find help in clarifying their vocation and God’s call on their lives through our leadership and discernment programs. Follow us on Twitter and Facebook: @GBHEM.