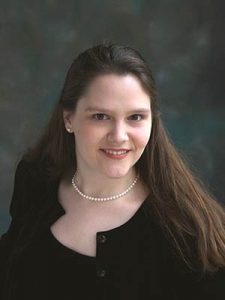 Lake Junaluska, N.C. – Lake Junaluska has announced new leadership of the Lake Junaluska Singers, a choral group that has been a part of Lake Junaluska’s history for more than 60 years. Mary Wannamaker Huff began as the interim director of the Lake Junaluska Singers on January 1. Huff lives in New York City with her husband, Andrew Henderson, and two sons, but also owns a home at Lake Junaluska. Having grown up coming to Lake Junaluska with her parents, her connection with Lake Junaluska and her friendship with many residents excited her to be considered as the interim director of the Lake Junaluska Singers. “My father is a United Methodist minister who served in the South Carolina Conference and served as dean at Furman University, and my mother was a director of Christian Education in The United Methodist Church and an elementary school teacher for 36 years. They came to Lake Junaluska for decades even before they bought a home here,” said Huff. “I can’t remember a time I didn’t come to Lake Junaluska,” said Huff. “I have a lot of vivid memories of enjoying the craft room at the lake as a child making copper rubbings of praying hands and stained glass. I went to every single Lake Junaluska activity with my grandmother during the summer, from women’s fashion shows to bridge games, to Folkmoot and to Singers’ concerts. My grandmother and I often arrived a few hours before the Singers’ concerts to get the best seats in Stuart Auditorium.” As homeowners, Huff and her family have continued to be involved in Lake Junaluska life. Both her sons have participated in children’s summer camps, made floats in the Independence Day parade, and played tennis and kayaked when they visit. “My husband and I are excited about the opportunity of raising our sons during the summer at Lake Junaluska. We want to make sure our boys grow up in the beautiful outdoors, which is a huge benefit of Lake Junaluska and quite a contrast to Manhattan skyscrapers. My husband is Presbyterian, and I am United Methodist. Because we both work and live at Madison Avenue Presbyterian Church (USA), we are delighted with the opportunity of raising them in both the Presbyterian and United Methodist traditions.” Huff graduated cum laude from Furman University in 1999 and received a Master of Music degree in 2001 from Yale University. She furthered her post-graduate studies in music education at Westminster Choir College, specializing in the training of children’s choirs. She is the founding director of the New York City Children’s Chorus and associate director of Music at Madison Avenue Presbyterian Church. Her choirs have performed in Carnegie Hall, St. Patrick’s Cathedral, Radio City Music Hall, and the Cathedral of St. John the Divine, as well for national broadcasts on Good Morning America, the TODAY Show, and CBS Sunday Morning. She also plays the organ for liturgies, accompanies and conducts the Church Choir and Saint Andrew Chorale, and manages the church concert series. “Lake Junaluska has always valued excellence in sacred music: in choral music and organ music, and by supporting young people singing. These are the very things that I have built my career around and what I love the most,” said Huff. “There is an amazing musical foundation already in place here, and the possibilities of building on this tradition of choral musical excellence to show the Christian hospitality that Lake Junaluska shows to all people seems to be very meaningful venture.” As Huff assumes her duties as interim director, Kathy McNeil joins her as the associate director of the Lake Junaluska Singers. McNeil received a Bachelor of Music in Education and Master of Music in Organ Performance from Westminster Choir College in Princeton, New Jersey. “The Lake Junaluska Singers have a marvelous history. Mary, with the assistance of Kathy McNeil, will build upon that legacy,” said Jack Ewing, Lake Junaluska executive director. “We are thrilled both Mary and Kathy are able to share their time, energy and enormous talents with not only Lake Junaluska, but also with those the Lake Junaluska Singers impact.” McNeil is the organist and choir director at Grace Church in the Mountains in Waynesville. She has given numerous recitals throughout the New York metropolitan area and in Western North Carolina, and she is in demand as accompanist for soloists and choral groups. McNeil presently is director for the Haywood Community Chorus and organist for Lake Junaluska. The Lake Junaluska Singers were formed in 1954, and their legacy includes national and international performances for conferences, dignitaries, and major events. Their music ranges from classical choral and contemporary works to gospel, folk, traditional hymns, and musical theater styles. Details about the Lake Junaluska Singers 2017 concert series can be found at lakejunaluska.com/singers. Lake Junaluska is a place of Christian hospitality where lives are transformed through renewal of soul, mind and body. For more information about Lake Junaluska, visit lakejunaluska.com.