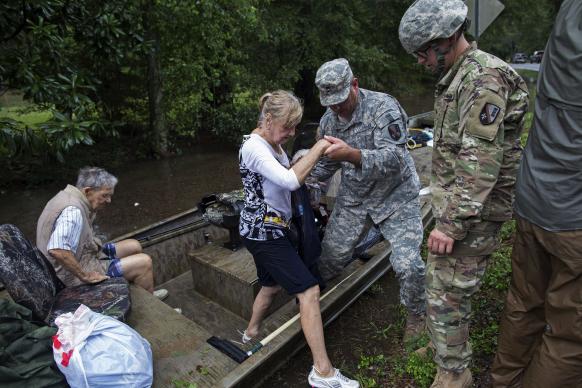 First United Methodist Church in Denham Springs, Louisiana, was proud to be a Red Cross Shelter for people flooded out of their homes late last week. But the good work stopped when floodwaters started closing in on the church itself. “It became very apparent that we had to evacuate the shelter,” said the Rev. Jackie King, pastor. Denham Springs would have to turn out the people it was rescuing, as well as volunteers. Sunday services were cancelled. King and other church leaders have been scrambling to make sure church members are accounted for, and to offer comfort and counsel to the many who have had major flood damage to their homes. “We’ll forever more talk about ?after the flood,’” King said. “This is catastrophic on a level that even those who have weathered many, many storms have never seen in their lifetime.” The flooding from heavy rainfalls that began last week has claimed at least seven lives in Louisiana, and prompted the rescue of more than 20,000 people. Thousands fled to shelters, and even Louisiana Gov. John Bel Edwards and his family had to leave the Governor’s Mansion in Baton Rouge because of flooding and loss of electricity. President Obama has signed a disaster declaration for the state, even as officials predicted waters would continue to rise in some areas. Louisiana Bishop Cynthia Fierro Harvey said she is unaware of any United Methodists among the fatalities, but she estimated that a dozen of the denomination’s churches have had flood damage, and many church members have major flood damage to their homes. The area just north of Baton Rouge, including Denham Springs, was especially hard hit because of flooding of the Amite River, she said. Harvey counseled patience, emphasizing that the situation is still threatening, making volunteer relief work premature. “Right now, we’re still in the rescue efforts,” she said. “We’ve got to stay out of the way of that. Next will come our trained early responders.” Harvey predicted it make take a few weeks before volunteer groups can be deployed safely and effectively. However, she said there’s an immediate need for cleaning buckets and monetary contributions, which can be made through the United Methodist Committee on Relief or theLouisiana Conference. The upper part of Louisiana was hit by flooding earlier in the year, Harvey noted. Gregory Forrester, UMCOR executive for disaster response, said Harvey has requested a $10,000 emergency grant and relief supplies in regard to the new floods. “We are working with her and her staff to meet those needs,” he said. Hard times, selfless acts United Methodist churches in the worst hit areas are helping a variety of ways. Zachary United Methodist, in Zachary, Louisiana, had flooding damage to its parsonage, but not to the church itself, so it’s trying to be of service. “We’re staging a day care free to anybody in the community that has young children and they’re trying to clean up their homes,” said Jan Whiddon, church secretary. She added that the beginnings of recovery in her area have been hampered by lack of supplies at local stores. “At Wal-Mart, there’s a line out the door and down the street,” Whiddon said. “They’re only letting 10 or so in at a time.” Zachary United Methodist called off church services Sunday, but did open for prayer at 10 a.m. “Quite a few were able to show up,” Whiddon said. The Rev. Jonathan King — husband of Rev. Jackie King — reported by Facebook on the situation at Blackwater United Methodist Church in Baker, Louisiana. “When it came to our church members some had to be airlifted out of their homes and the folks that were staying at our church had to be airlifted out,” said King, pastor of Blackwater United Methodist. “Everyone is alive even though many homes have been flooded. Jackie King credited many with acting selflessly under extreme conditions. “I had church members whose house was going under, but because they had a boat they went out to rescue people,” she said tearfully. Hodges, a United Methodist News Service writer, lives in Dallas. Contact him at (615) 742-5470 or newsdesk@umcom.org