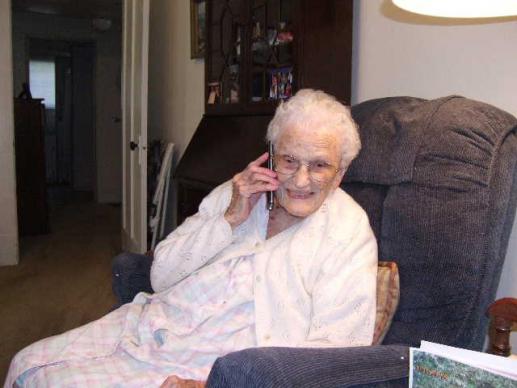 Jean Christy, a United Methodist who proved you’re never too old to start a new ministry, died May 28 in Murphy, North Carolina. She was 111, according to recently discovered records in her family Bible. Around the age of 105, Christy decided she needed to do more for her congregation of Andrews (North Carolina) United Methodist Church. So she called her pastor and suggested she might use her telephone skills to cheer up fellow Christians. The Rev. Mike Macdonald, her pastor at the time, agreed. For the next couple of years, she served as the church’s “birthday ambassador,” offering well wishes to regular and not-so-regular worshippers on the anniversary of their birth. She estimated she called at least one person a week. “I just call up and say, ‘Your church wants you to have a very happy birthday, and Miss Christy wants you to have one also,’” she told United Methodist News Service in 2010. “And they seem really happy to hear it.” When asked her secret to a long life, Christy would say: “Never get married. Never have children. Never go to the doctor.” She could easily add: Never lose faith. She celebrated what was likely her 107th birthday by renewing her baptismal vows at Andrews church, where she had been a member since adolescence. To many at the church and the wider community of Andrews, she exemplified Christian discipleship. She told UMNS that her parents taught her and her six siblings to go to church “every time the door opened.” Her faithfulness stood out even in a family that included a church treasurer, a district superintendent, three ordained elders, a diaconal minister and a full-time local pastor. “In our family, a lot of us are preachers, but we will never have the kind of influence that Aunt Jean had,” said her great-nephew, the Rev. David Christy, senior pastor of First United Methodist Church of Gastonia, North Carolina. “It was so consistent for so many generations. Both in the church and the school, everybody knew Aunt Jean.” Beloved teacher Almost everybody in Andrews, a town of under 1,800 in southwestern North Carolina, was fond of the woman they called “Miss Christy.” “You walk in with Aunt Jean, you might as well be walking in with the president,” her great-nephew said. “There was a table ready, and they knew what she wanted. It was just amazing to see the respect.” For decades, Christy taught the youth Sunday school class and helped lead the church’s youth group. Many of her young charges at church were her high school students during the week. “More than English, she taught them manners and everything else,” David Christy said. For his great aunt, baseball caps were a particular bugbear. Macdonald, her former pastor, recalled the time Christy walked into a restaurant and saw a group of men she had taught, all wearing their ball caps indoors. “When she walked by, she didn’t say a word,” Macdonald said. “She just flipped off their ball caps.” A visitor to town — seeing what she was doing — quickly removed his ball cap as well. Still, her former students remember her lessons fondly. The town’s elementary school is on a street now named for Jean Christy. In 2010, Andrews United Methodist Church also named its young adult Sunday school class in honor of her and her family. ‘A lot of fun and a lot of faith’ In recent years, she lived in a nursing facility in nearby Murphy and could no longer worship at Andrews United Methodist Church. Nevertheless, church members and others routinely made sure to bring Andrews to her. “I was never by that someone wasn’t walking in, saying Miss Christy taught me in high school or taught my dad,” David Christy said. To the end of her life, Christy liked to tease people and to be teased herself. She was “a lot of fun and had a lot of faith,” her great nephew said. The Rev. Mary Brown, the pastor of Andrews United Methodist since 2013, said if she gave Christy a hard time, the centenarian’s eyes would twinkle and she would “give a beautiful chuckle.” Brown said her parishioner had a tremendous impact during the three years she knew her. “I've heard her thank God countless times (literally, countless) in a prayer: ‘Thank you, thank you, thank you....’  How powerful to see someone in her stage of life filled with gratitude,” she said. “When I visited her I felt peaceful, just to be in her presence. The light of Christ shone brightly in her.” The congregation of Andrews United Methodist Church will celebrate Christy’s life at 11 a.m. EDT June 4. Hahn is a multimedia news reporter for United Methodist News Service. Contact her at (615) 742-5470 or newsdesk@umcom.org.