by Lynne Gilbert May 16th was United Methodist Women Day at General Conference 2016, and it was very special to join in the celebration of our legacy and our continuing mission and ministry as we look toward our 150th birthday in 2019. It was an exciting and busy day that included the consecration of 23 new deaconesses and home missioners, a rally for clean water as a human right, and an order of the day multimedia presentation to celebrate the work of United Methodist Women…turning faith, hope and love into action on behalf of women, children and youth around the world. Worship has been powerful during General Conference, with great preaching from our bishops, and an outstanding music team leading us in song. Monday’s 8:00am worship service also included a historic first…the consecration of a new group of deaconesses and home missioners on the floor of General Conference. We had two persons from Western North Carolina! Our own Helen Ryde (Weaverville) and Linda Young (Catawba) were consecrated along with 21 others. Deaconesses and Home Missioners are laywomen and laymen who are called by God to be in a lifetime relationship in The United Methodist Church for engagement with a full-time vocation in ministries of love, justice, and service. Congratulations to Helen and Linda! You can watch the entire worship service at this link! [caption id="attachment_5969" align="aligncenter" width="640"] 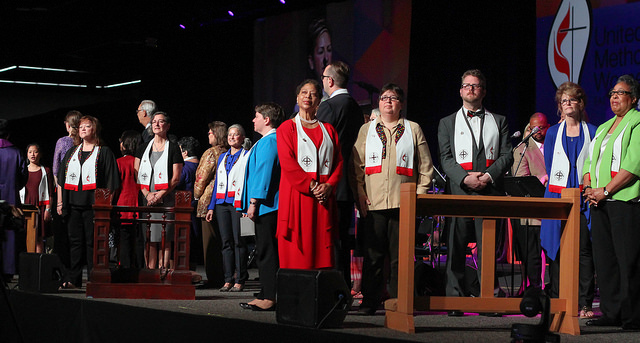 Photo by Maile Bradfield, UMNS. Linda Young and Helen Ryde are in the front group to the left[/caption] During the lunch break, United Methodist Women sponsored a rally to advocate for clean water as a human right for all of God’s children. About 300 people gathered across the street from the convention center to rally for clean water issues in places like Flint, Michigan, Latin America, and Africa. Protection of Water is one of a number of resolutions on important justice issues that were proposed to the General Conference by United Methodist Women. [caption id="attachment_5970" align="aligncenter" width="640"] 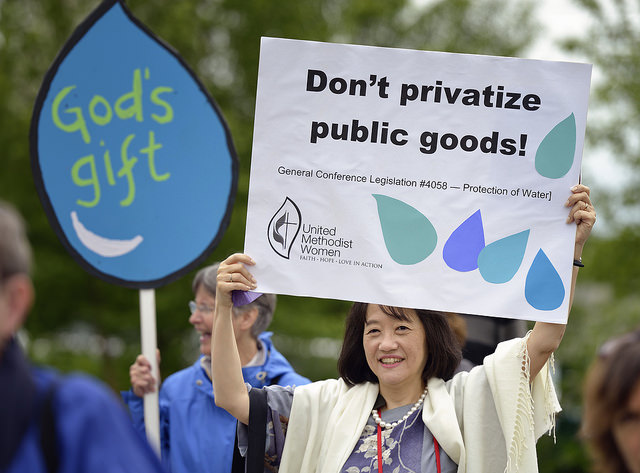 Hikari Chang holds a sign during a May 16 vigil for environmental justice at the 2016 United Methodist General Conference in Portland, Ore. Sponsored by United Methodist Women, the vigil focused especially on struggles for clean water around the world. Chang is a regional missionary based in Japan. Photo by Paul Jeffrey, UMNS.[/caption] A highlight of the day was the order of the day for United Methodist Women…at 3:53pm, for seven minutes, before the afternoon break. In the high energy style of women in mission in the 21st century, we celebrated our history, and the many ways we are in mission today. As we have throughout our history, United Methodist Women continue to be engaged in the work of justice and advocacy on important issues of the day…like domestic violence, human trafficking, racial justice, maternal and child health, economic justice, and climate change. Our United Methodist Women presentation team made us proud! They rocked the house with what was surely the BEST report to this General Conference! Watch the video at this link! [caption id="attachment_5971" align="aligncenter" width="640"] 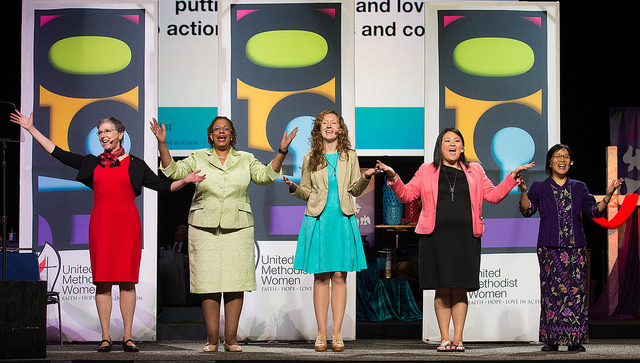