Remembering the Deaths of Wesley, Asbury 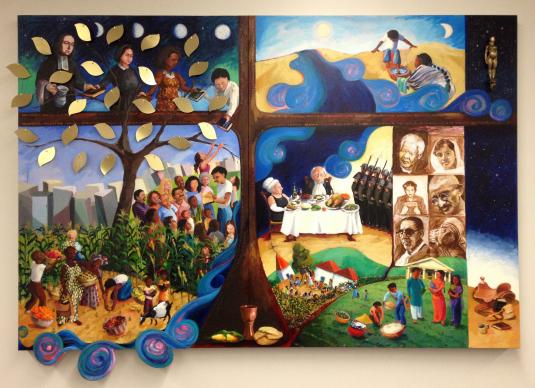 John Wesley stands at the outset of the Methodist movement, as represented in the upper left corner of this new mission mural that emerged from a dialogue on Wesleyan history among staff at the United Methodist Board of Global Ministries. Wesley hands God’s Word, represented by the Bible, to those who carry the Gospel of Jesus Christ to the ends of the earth. Lisa Katzenstein, the artist, is the board’s executive secretary for leadership development. Her mural hangs in the outer office of the general secretary of Global Ministries.[/caption] By Linda Bloom (UMNS) After John Wesley died – 225 years ago this week – Francis Asbury noted in his journal that he probably would never read the works of the founder of Methodism again “without reflecting on the loss which the Church of God and the world has sustained by his death.” Then, Asbury, the founding bishop of the Methodist Church in America, continued on horseback to appointments in Virginia. He still had a mission to carry out – which he did for another 25 years before his own death on March 31, 1816. The United Methodist Commission on Archives and History is marking both anniversaries, but focusing more on the 200 years since Asbury’s passing, noted the Rev. Alfred Day, the commission’s top executive. On March 2, the commission’s Facebook page will feature a “United Methodist Almanac” posting with a brief story line on the highlights of Wesley’s life. An exhibit, “Francis Asbury and the Shape of American Methodism,” will be on view March 7-April 30 at the United Methodist Archives and History Center at Drew University in Madison, New Jersey. The exhibit also will be online. The commission will offer downloadable Asbury-related resources later this month to help local churches remember the “pioneer and the architect of the American Methodist Church.” Reflections in a journal Though Wesley died on March 2, 1791, “in his own house in London, in the eighty-eighth year of his age, after preaching the Gospel sixty-four years,” Asbury did not learn of his passing until April 29, nearly two months later. In his journal, Asbury’s praise for Wesley was abundant: “When we consider his plain and nervous writings; his uncommon talent for sermonizing and journalizing; that he had such a steady flow of animal spirits; so much of the spirit of government in him; his knowledge as an observer; his attainments as a scholar; his experience as a Christian; I conclude, his equal is not to be found among all the sons he hath brought up, nor his superior among all the sons of Adam he may have left behind.” L. Dale Patterson, archivist for Archives and History and curator of the Asbury exhibit, said it was not surprising how Wesley’s representative in America chose to record his reaction to the news. “Wesley encouraged all of his Methodist preachers to keep a journal,” he explained. Journals helped the preachers keep track of their ministry, reflect on faith and record their interactions with others. Wesley printed copies of his own journal on a regular basis, but Asbury only printed a few selections, Patterson said. The complete journal was not printed until after his death. Because Asbury wrote on a regular basis, his journeys can be tracked through the journal. “It functions, in many respects, like a mini-autobiography,” Patterson said. A scholarly annotated edition of the Asbury’s journal, printed in the mid-1950s and paired as a set with most of his known letters, provide “the core information that we have about Asbury.” That information, as the exhibit announcement points out, reveals the “shear dogged-determination” of a man who “established the shape of American Methodism for its first one hundred years.”  The exhibit emphasizes Asbury’s background and leadership skills and the impact he had on itinerancy, the conference and the episcopacy in the Methodist Church. Commemorating a death Commemorating the anniversary of one’s death was more common in the 18th and early 19thcenturies than it is today, when the birthdays of famous people are more likely to be remembered. “Several of the early art works on Wesley after his death would show him in repose – on view, as we might say today – at a wake,” Patterson said. “There are others of angels carrying Wesley up to heaven.” Later, he added, depictions of Wesley would show him instead as a young evangelist starting the Methodist movement or being rescued from a burning rectory fire as a child. Asbury, who had been in America for 20 years when Wesley died, carried on with his Methodist mission, continuing what Patterson calls “the large circuit” by wintering in the south and then heading north in the spring, reaching New England by summer. He died on March 31, 1816, on his way to an annual conference. Bloom is a United Methodist News Service multimedia reporter based in New York. Follow her at https://twitter.com/umcscribe or contact her at (646) 369-3759 or newsdesk@umcom.org