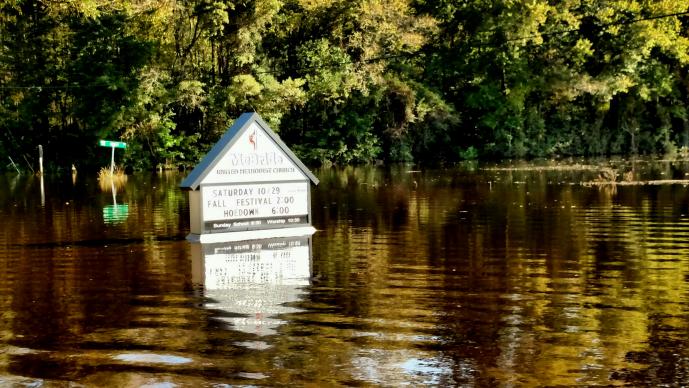 McBride United Methodist Church, South Mills, North Carolina, had eight to 10 inches of flood water in the fellowship hall after Hurricane Matthew. The ground was already saturated from September floods.[/caption]
By Kathy L. Gilbert Oct. 12, 2016 | UMNS
After Hurricane Matthew submerged South Mills, North Carolina, one United Methodist pastor loaded up a six-wheel drive military vehicle and drove into floodwaters to deliver bottled water and food and prayers to trapped residents.The Rev. Bruce Willis, pastor of McBride United Methodist Church, put out a call for help, and one of his church members loaned him a deuce and a half military vehicle. He took the truck to a housing unit and some neighboring homes. Willis said the same area flooded three weeks ago and the ground was still saturated.
[caption id="" align="alignright" width="200"] The Rev. Bruce Willis walks through flooded Deerfield neighborhood in South Mills.  Photo by Angie Willis, courtesy of McBride United Methodist Church.[/caption]
“We helped as many as we could,” Willis said. He doesn’t really know how much bottled water and food he delivered. “I just know when we left the back of the truck was full and when we came back it was empty.” “It’s going to take a while to recover,” he said. McBride’s church also received 8 to 10 inches of floodwater in its fellowship hall. The North Carolina Conference disaster relief teams are still assessing damage and some of the rivers have not crested, said Ann Huffman, disaster response coordinator. Hardest-hit areas are in Windsor, Lumberton and Goldberg. Derek Leek, director of communication for the conference, said the flooding was not as bad on the coast as in those areas by rivers. “There are multiple people out of their homes, and the major concern is where will they go,” Huffman said. The high school has been the major shelter, but it needs to reopen soon so classes can resume. Death toll still rising Hurricane Matthew, one of the fiercest hurricanes in nearly a decade, has left nearly 1,000 dead inHaiti and at least 38 dead in the United States — 19 in North Carolina. The state’s officials fear the toll may go higher. The hurricane formed near the Windward Islands on Sept. 28 making landfall in Haiti and eastern Cuba on Oct. 4 as a Category 4. The Weather Channel reported Hurricane Matthew moved close to the coasts of Florida, Georgia, South Carolina and North Carolina. Matthew made one official U.S. landfall on Oct. 8 southeast of McClellanville, South Carolina, as a Category 1 hurricane with 75 mph winds. Still assessing damage The United Methodist Florida Conference reported 29 church claims of damage as of Oct. 11.
[caption id="" align="alignright" width="280"] A volunteer team from Sun City Center United Methodist Church, Brevard County, North Carolina, work on repairing a door. Photo courtesy of Sun City Center United Methodist Church[/caption]
“Our churches fared amazingly well,” said LaNita Battles, the conference’s director of Ministry Protection. “None of the churches appear to have damage which makes them uninhabitable. My rough estimate of damage thus far is $500,000 to $700,000.” Six of the 12 districts in the South Carolina Conferencehave seen damage from the storm, several of those with massive flooding, and the conference has opened up its disaster response hotline to begin helping people in need. Matt Brodie, disaster response coordinator for the South Carolina Conference, said the church needs people to assess needs in their local communities, as well as begin to give of their time, their buildings and their financial resources. “We’re still in the assessment phase, and we’re gathering as much information as we can from those who are on the ground, but those who are not affected can still help,” Brodie said. The South Georgia Conference is also still assessing damage. Ways to help Cleaning buckets are needed in all affected areas. The United Methodist Committee on Relief has directions on their web site for assembling the buckets. Donations can be given online at Disaster Response, International #982450 and United States Disaster Response Fund. North Carolina, South Carolina, and South Georgia are also asking for donations. The Florida Conference offers ways to help. Gilbert is a multimedia news reporter for United Methodist News Service. Contributors to this story are: Derek Leek, director of communications, North Carolina Conference; Gretchen Hastings, director of connectional relations, Florida Conference; Kelly H. Roberson, director of communications South Georgia Conference; and Jessica Brodie, editor South Carolina United Methodist Advocate Newspaper. Contact Gilbert at (615) 742-5470 or newsdesk@umcom.org.