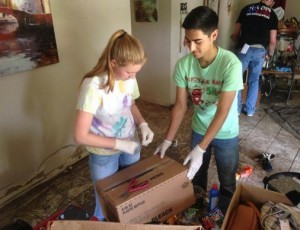 An online ministry of First United Methodist Church in San Marcos, Texas, helped recruit and organize volunteers to help with flood relief there. Students from San Marcos High School and Texas State University removed items from a flooded home in San Marcos' Blanco Garden area[/caption] By Sam Hodges MAY 26, 2015 | DALLAS (UMNS)
Raging floods in central and south Texas over Memorial Day weekend forced a United Methodist couple onto the roof of their home, where the husband lost his grip and the wife sang hymns until a rescuer arrived.Larry Thomas, 74, was swept away and is among 12 people missing in the floods that engulfed houses along the Blanco River in Wimberley, Texas. His wife, Carol Thomas, survived with scratches and bruises. The Thomases are members of Wimberley United Methodist Church and Mrs. Thomas teaches kindergarten at nearby Dripping Springs United Methodist Church’s Pathways School. “She spent about six hours singing church hymns” while holding on first to a satellite dish and its cable, then as the waters receded coming to rest on a red-tipped photinia hedge, said Jenny Aston, the school’s director. The ordeal began late Saturday night and Mrs. Thomas was rescued early Sunday morning by a neighbor in a boat, Aston said. Perhaps as many 20 families of Wimberley United Methodist Church, including the Thomases, lost homes as a wall of water came down the Blanco, said the Rev. Dana Hamilton, pastor. The Rev. Bill Henderson, superintendent of the Hill Country District of the Rio Texas Conference, mourned the losses. “We’ve been praying for rain. We just didn’t want all of it to come at one time,” Henderson said. “The cost has been tremendous in property and human lives.” Conference gathering goes on Flooding caused problems across much of Texas, including Houston, where the Texas Conference was having its annual gathering at a downtown hotel. Bishop Janice Riggle Huie decided the meeting, which concludes Tuesday, had to continue on schedule. Voting machines and hotel space were under contracts that could not be extended. “There’s really nothing else we can do other than just keep on keeping on,” said Paula Arnold, Texas Conference communications director. Many of the 2,000 people attending are staying at the Hilton Americas, but others were trying to make their way in Monday from the Houston area. “Some parts of town you cannot get through,” Arnold said. “The streets are completely flooded.” The Rev. Arturo Cadar made it without problem Monday from nearby Friendswood. “But I saw a lot of towed cars,” he said. Relief efforts underway The Rio Texas Conference already has relief efforts underway, since both the Wimberley and San Marcos areas were hard hit. “We’re trying to deploy early response teams now,” said Eugene Hileman, disaster relief coordinator. “We’ve distributed all the flood buckets we have. We’re going to be requesting more from UMCOR (United Methodist Committee on Relief.)” Hileman said donations to the conference’s relief fund or to UMCOR are the best way to help at present. The First United Methodist Church of San Marcos is using its online ministry ServeSanMarcos to inform and organize volunteers for cleanup. Some 350 volunteers answered the call, showing up at a parking lot Tuesday morning at 9, said the Rev. Todd Salmi, associate pastor. “They’re out on the streets now, doing initial response and cleanup,” he said. Salmi said the church created the website and social media ministry after discovering that local nonprofits needed help in finding and organizing volunteers. The ministry provides up-to-date information and can send out email blasts. “The church has really been able to be a connection resource,” Salmi said. An online campaign to help the Thomas family had raised more than $30,000 by Tuesday. “It’s just been a big outpouring of help,” Aston said. Hamilton said the couple has been “very active” members of Wimberley United Methodist. She said Larry Thomas had suffered a stroke and had other health problems. The church met on Sunday morning, after the terrible night of flooding, but had prayers and Scripture reading instead of formal worship. Her word to her congregation: “God is with us. When you cry, God cries. When you hurt, God hurts. This is not an act of God. This is a storm, and this is what happens. How we react is what makes the difference.” Hodges, a United Methodist News Service writer, lives in Dallas. Contact him at (615) 742-5470 or newsdesk@umcom.org