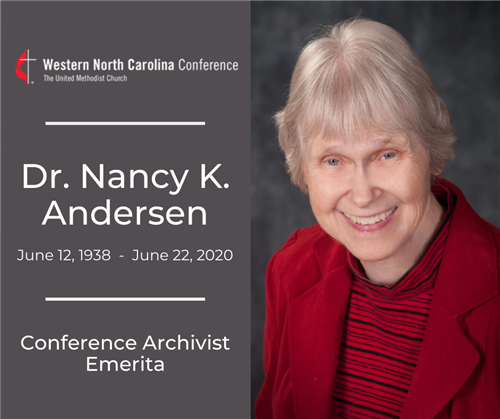 Nancy was born on June 12, 1938 to the late Rev. Homer M. Keever and Alta Allen Keever.  During her youth she was an active member at Broad Street UMC, Statesville and was a graduate of Statesville High School.  Dr. Andersen received her B. A. from Duke University, her Master’s Degree from Memphis Theological Seminary, and her Ph. D. in Church History from Vanderbilt University.  Before being named Conference Archivist in January 1999, Nancy had worked previously on the staff at the former Lambuth University Archives (which also served as the Archives for the Memphis Annual Conference).  She was married to the late Commander (retired) M. Eugene “Gene” Andersen, who died June 14, 2002.

Upon her being named WNC Archivist, Nancy and Gene moved to Mooresville, NC from Memphis, where Nancy became an active member at Williamson’s Chapel UMC, serving as an officer in their UMW and led planning for the church’s centennial in 2012.

Nancy also served in the WNC Conference as a Member of the Board of Advisors at Aldersgate from 2001-2010, where she later became a resident.  While living at Aldersgate, Nancy was active in the Monday School, the Bridge Club, and served as Secretary of the Resident’s Council.

During her years of service as Archivist of the WNC Conference, Nancy brought a wealth of knowledge to the position.  She made answering questions of and assisting patrons with their research requests her top priorities.  Nancy has been recognized for her dedication to record keeping, her flexibility, and her persistence.

Subsequent to her retirement as WNC Conference Archivist in July 2018, Dr. Andersen was named Archivist Emerita by the WNC Conference Commission on Archives and History at their meeting on February 12, 2019.

Dr. Andersen has served the larger United Methodist historical community as an active member of the SEJ Historical Society, first attending a meeting of the society in 1987 and attending nearly 20 meetings since then.  She provided leadership for this organization by serving as Secretary from 2008-12.  She was named an Honorary Member of the SEJ Historical Society at their Annual Meeting in 2019.

Dr. Andersen was preceded in death by her parents, her husband, and a daughter, Kathy Andersen.  She is survived by her son Michael Andersen and wife Bridgett, of Memphis, TN; three grandchildren, Amanda Laveri and husband Anthony of Bremerton, WA, Christian Andersen currently stationed at Lewis-McCord Joint Base, Washington, and Emily Andersen of Memphis, TN; two great-grandchildren, Oakley Andersen and Charlie Laveri; and her sister Mary K. Pretlow and husband Tiff of High Point, NC.  A Memorial Service for Nancy will be scheduled after COVID-19 Phase 3 guidelines go into effect.  Arrangements are being handled by Cremation Society of Charlotte.

Praise God for the life and service of Dr. Nancy Keever Andersen!